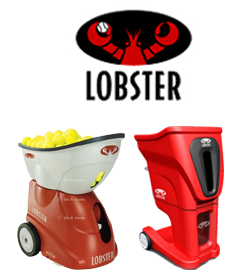 Lobster Sports Inc. has truly customer oriented beginning. In 1970, a retired bank president, Harry Giuditta, bought a failing manufacturing company. The tennis ball machines produced by this company were defective and the first thing this new owner did was to recall every machine, refurbish them and send them back at no cost to the customer. 40 years later, this man’s grandson runs the company and continues to produce a high quality, cutting edge tennis ball machine.

“By believing in always operating with integrity and providing outstanding customer satisfaction, Lobster Sports has transformed into a company synonymous with quality and innovation.” – Lobster Sports

Whether you are looking to simply improve your game and get in a great workout, or you need a machine that will keep up with you through advanced programming options, Lobster has the machine for you.

The Elite Freedom is Lobster’s economy model. With court-wide oscillation and an easy-to-transport design, this little machine is perfect for beginner to intermediate players. The Lobster Elite I is a bulkier version of the Freedom with more variations in spin and ball speeds up to 80 m.p.h. Vertical oscillation is a feature not seen in the Lobster line until the Lobster Elite II. Random selection of both horizontal and vertical oscillation added to a random variation of deep and shallow, will keep you moving on your feet and challenge your ability to think and react quickly. In addition to the triple oscillation seen on the Elite II, the Lobster Elite III introduces a two-line feed with variable depth options. The Elite III also comes with two factory programmed drills designed to work on narrow and wide, fore and backhand skills.

The Grandslam Elite IV is a machine where Lobster really starts to pack it in. The LED touch panel is a step up from the bulky turn-dial knobs found on other brand ball machines. At one touch, the machine can be set to wide or narrow 2-line feed with deep or sweeping patterns. The Elite IV comes with three preprogrammed drills: The Grinder, which sends a volley of six balls to the back court, each with a different spin. The Power Baseliner, which sends the balls across the span of the back court with speed and little spin. And the All-Courter, which utilizes front and back courts with less speed and some top spin.

The big daddy of the Lobster line of tennis ball machines, The Lobster Elite Grandslam V and its fancier counterpart, the GSV Limited Edition, both pack a powerful punch on the court. The cutting edge technology found only in these machines allows you to program specialized drills that can be stored in memory for later recall. Imagine the skill set you can develop as you customize an entire drill with 18 shot locations, variable speed rate and spin. The Grandslam V LE surpasses many tennis ball machines on the market in simulating true match play. Fully random oscillation and variable speed and spin mode throw balls throughout the entire court at varying speeds, trajectories and spins. The Grandslam V Limited Edition comes standard with a 20 function remote and fast-charger.

Six drills are preprogrammed into these powerhouse machines. In addition to the three drills programmed into the Elite IV (the grinder drill, the power baseliner drill, and the all-courter drill), the Elite V has three more drills: The Forehand Plus drill challenges a player to maintain a dominant court position with repetitive fore hand hits. The Attack/Defend drill throws balls with greater ball speed and minimal spin, which will teach players to move in all directions across the court. The Approach drill varies spins and arcs designed to encourage proper approach from the base line. All of these drills are pre-programmed into the machine at the factory, for one-touch, skill challenge.

Lobster Sports promotes and takes part in three wide reaching charities that have been created and endorsed by tennis pros. The Andre Agassi Charitable Foundation is an after school Boys and Girls club designed to give children a safe place to go after school to develop their athletic abilities. The Chris Evert/Raymond James Pro-Celebrity Tennis Classic raises money to help the fight against child abuse and neglect in the state of Florida. The Tim and Tom Gullikson Foundation holds the Swingtime pro-celebrity pro-am tennis tournament to raise awareness and physical, emotional, and social assistance for brain-tumor patients and their families.

Tennis ball machines give you the ability to practice on your schedule and at your pace, improve your game in ways you never imagines by investing in your very own training aid.