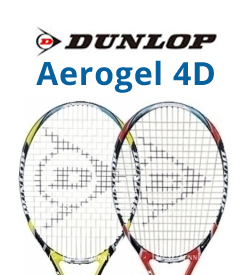 Dunlop tennis racquets are a revolutionary concept in engineering with a tradition of providing racquets to some of the biggest names historically. In the past, players like John McEnroe and Steffi Graf used Dunlop racquets en route to hall of fame careers. The tradition continues with world class players like Nicolas Almagro, ranked 10th in the world, and Dominika Cibulkova, ranked 12th in the world, using Dunlop racquets in professional competition today. The same engineering and design of racquets that allowed these professionals to be successful is available to recreational and competitive players alike.

When you replace the liquid portion of a gel with a gas, the end result is a type of aerogel, a substance commonly referred to as 'frozen smoke'. Although technically not a gel, but rather a solid created from a gel, aerogels have unusual properties not found in common solids. They are great heat insulators, but more importantly are incredibly strong. The aerogel used in Dunlop Aerogel 4D tennis racquets can support up to 4,000 times its own weight. The end result is an instrument that is strong, yet light with a better touch.

This term refers to a technology found on Dunlop Aerogel 4D tennis racquets that uses four directional braiding where four braided fibers of S-glass fiber are combined with an aluminum alloy sheath, but there's more to it than that. The fibers are oriented in four different directions to create a material such that one sheet of it has the equivalent strength of four sheets of carbon fiber material. This stabilizes the torsional twist of the racquet to give you a better feel and touch.

Dunlop Aerogel 4D tennis racquets, with their use of aerogel and four directional braiding, demonstrates thinking outside the box when it comes to product engineering. These racquets can stand up to the rigors of professional tournaments while still being useful to common everyday players.