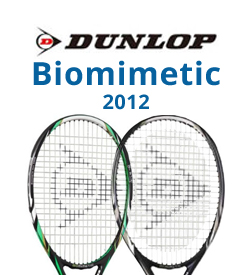 Dunlop Biomimetic racquets were designed based on the properties of several items found in nature and using those properties to build a much better racquet. The term, biomimetics, refers to the concept of mimicking nature.

Dunlop tennis racquets have a great history in the sport of tennis, having been used by past greats such as John McEnroe and Steffi Graf. However, the makers of today's models are not content to rest on the laurels of past success, coming out with several innovations that make playing tennis a better overall experience.

It might not be accurate to refer to a shark as a 'king of the sea' in the same way a lion is called 'king of the beasts', but it's at least a tempting thought. One of the advantages a shark has as a skilled predator is the ability to move through the water with streamlined efficiency. Part of the reason for this is the distinct shape of their body, but another reason is that their skin functions in such a way that it reduces drag. Aeroskin material in the Dunlop Biomimetic line of racquets, duplicates the aerodynamic properties of shark skin to construct a racquet that moves with less air resistance on each swing.

The honeycomb pattern found in beehives is well known for its strength, which is why the design is used frequently in aircraft manufacturing. Dunlop Biomimetic HM6 Carbon racquets are built from several graphite sheets using the honeycomb pattern between layers of super-light aerogel. It creates a racquet that is light, yet structurally strong and that reduces vibration and its harmful effects.

Geckos have sticky pads on the bottom of their feet, allowing them to walk up almost any surface. Gecko-Tec technology in Dunlop Biomimetic racquets incorporate this feature in the grip design with a grip that wicks away sweat, sticks to your hand and provides a great feel.

Dunlop Biomimetic racquets are the result of an interesting approach to improving design. Instead of simply taking a look at the construction of previous generations of racquet models and tweaking them, the makers of this series took a step back and consulted Mother Nature for help, using concepts that have been around for thousands of years.