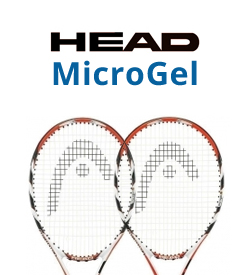 Head tennis racquets are evolving as fast as the game. With faster, more aggressive swing styles, more versatility in footwork and hitting stances, and more play on spin, tennis equipment has to hold up under pressure. Head MicroGel tennis racquets not only meet that challenge, but the unmatched atomic qualities of this revolutionary material, add a new level of competition to your game.

Head MicroGel tennis racquets are made from a revolutionary new silicon-based material that has the lowest density of any racquet technology on the market. MicroGel weighs only 3 milligrams per cubic centimeter and can support up to 4,000 times its own weight. The combination of MicroGel and strong carbon fibers creates a racquet that evenly distributes the impact load throughout the frame for unmatched responsiveness and a rock-solid feel.

During ball impact, the MicroGel material deforms and compresses, absorbing the impact force and dispersing it to the entire frame. The responsive quality of the silicon-based material, combined with the carbon fibers, quickly returns the molecular structure to its original shape.

For enhanced spin generation, Head Extreme racquets feature an increased head width. The larger head allows the ball to slide further across the string bed, a motion which enhances spin and improves stability. The greater spin enables the ball to clear the net with more distance than a flight path that does not include spin.

The deformative qualities of the revolutionary MicroGel material combined with a larger head size make Head MicroGel tennis racquets the ultimate weapon for players who hit hard and utilize spin to dominate the court.