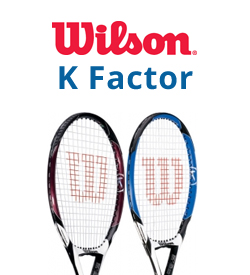 Wilson tennis rackets have been a household name in the sport for decades. The fact that world ranked players like Serena Williams and Roger Federer use them in competition is living proof of the high quality and state of the art design they have. Whether you are a casual player or one who plays to win, you can be confident in your racket if it's a Wilson.

Graphite as a material for building tennis rackets has long been accepted in the tennis marketplace for its strength and light weight. Scientists have found creative ways to improve on this design with improvements that make rackets even stronger. In the previous generation nCode series, silicon dioxide was placed between graphite fibers for a stronger racket body using nanotechnology which works on a microscopic level.

It was discovered that nCode could be improved even more with the introduction of carbon black fibers, again using nanotechnology. By attaching the carbon black fibers, known as [K]arophite Black to the silicon dioxide on one end, then attaching the other end to the graphite fibers resulted in a racket even stronger than nCode. This improvement became known as the Wilson K Factor.

K Factor in Other Aspects of Racket Design

There is more to improving upon a racket's design than simply changing the material used to construct it. You will find improvements in several different areas of a Wilson K Factor racket.

There are two wing-like parts added the racket at about the 10 and 2 o'clock positions of the hoop. These parts, known as [K]onnector technology, cause the ball, when struck, to stay on the strings longer. It results in a larger sweet spot that is more forgiving for off-center shots.

[K]ontour Yoke technology is the result of changing the shape of the cross section of the racket frame in the yoke area to be more stiff. It improves torsional stability for more control.

The [K]ompact Center is the result of a larger opening between the handle and the throat of the racket. It improves overall handling and feel.

Wilson K Factor technology provides almost anything you would want in a racket. You get a product from a company with a strong history and that is relentless in improving the performance of its products.