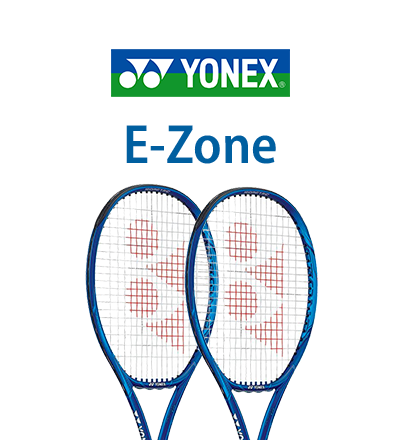 The new 7th-generation Yonex EZONE tennis racquet series is upgraded with easy power and an improved plush for a sweeter feel. The Ezone series is suitable for the widest audience, featuring models ranging everyone from juniors, and recreational players, to the top players in the world.

4-time Grand Slam Champion Naomi Osaka has won half of the hard court slams dating back to her first victory in 2018 at the US Open. Using the EZONE series since her debut on the WTA Tour, Naomi was the first Japanese player – male or female – to sit atop the world rankings in 2019. She pairs her EZONE with POLYTOUR STRIKE string in blue.

VIBRATION DAMPENING MESH (VDM): For added touch and precision, a stretchy mesh material is wrapped around the graphite within the grip to filter unwanted vibrations.

AERO SHAPED DESIGN: For a plush feel, A tapered frame design with a thinner frame face results in a softer racquet.

The Yonex Ezone tennis racquet series is suitable for the widest audience of players.