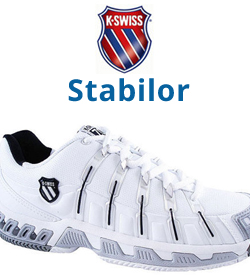 Since 1966, K-Swiss has dedicated itself to developing comfortable footwear for tennis players. In doing so, they have come to realize that not all feet were created equally. As the Defier miSOUL demonstrates, there is much demand for a highly cushioned shoe. At the same time however, K-Swiss also realizes there is also much demand for shoes that do not provide a lot of cushioning. Such is the rationale for the Stabilor series, the shoe that has the most lateral stability of any K-Swiss tennis shoe.

Not even the sport of basketball has as much lateral movement as tennis does, and it has more than most sports do. Many tennis players need a shoe that will perform with them when playing an intense match. As they make quick lateral movements in the way they start, change direction and stop, competitive tennis players can put a lot of stress on their shoes, which is why the K-Swiss Stabior tennis shoe is a good option.

The combination of a midfoot shank, along with a skeletal support structure, give this shoe such great lateral support. The durable outsole is also critical to lateral play that not only challenges a shoe's stability, but also its structural integrity, especially on the outsole.

The AOSTA 7.0 material combined with Drag Guards in the heel and toe area and a Durawrap XD toe guard, make the outsole a robust component of the K-Swiss Stabilor tennis shoe. Its herringbone pattern also provides great traction and can be played on several different surfaces.

As mentioned earlier, cushioning is minimal. Shock Spring inserts are in the heel and forefoot area for some shock absorption.

K-Swiss developed a shoe well-suited for competetive play when it developed the Stabilor. The shoe has the features needed to limit foot roll that quick stop-and-go lateral movements can cause. This innovative design is only possible when a company cares enough to pay attention to its customers' needs.