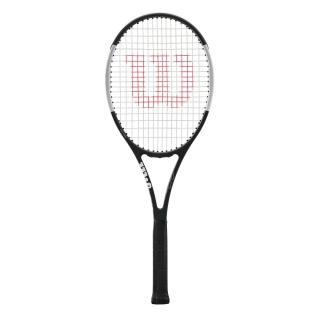 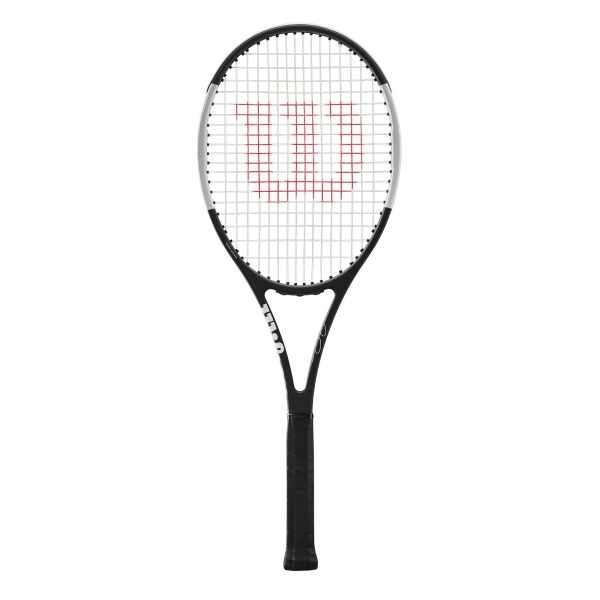 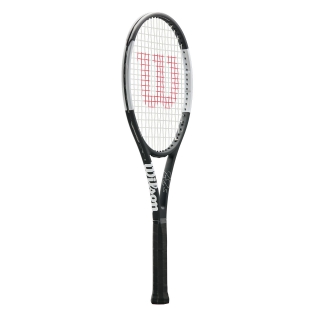 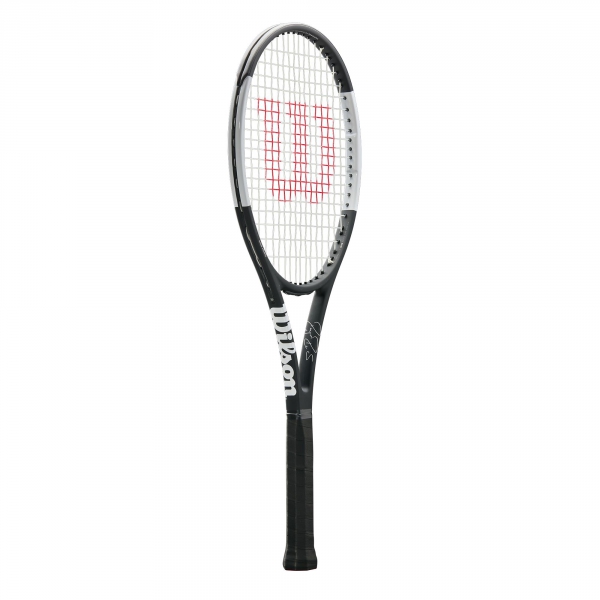 END_OF_DOCUMENT_TOKEN_TO_BE_REPLACED

This is the flagship racket for the family of Wilson Pro Staff's. The Pro Staff RF97 Autograph Tuxedo Tennis Racket was designed and built specifically for Roger Federer, the undisputed GOAT of men's tennis. Roger's autograph is featured prominently on the V of the throat, right above where the handle ends. The matte black color and white stripes on the 3 o'clock and 6 o'clock sides of the head, along with the "ruberized" and textured paint finish, give this true player's stick an unrivaled look and feel - it's the shirt to go along with the tuxedo.

As for playability, it has that familiar Pro Staff feel we've all come to know and love over the years.  This means one of the stiffest frames around, made possible by Wilson's patented braided graphite with aramid added.  Aramid is a synthetic polymer closely related to nylon, often used in aerospace applications, and its fibers are known for incredible strength and resistance to heat.  This helps with energy return, not just from the strings, but from the frame itself; and it won't warp as easily in the hot, Summer sun.

It comes strung at 12.6 ounces, which is nearly tour weight (Roger's actual frames are much heavier yet, as are most touring pros').  This gives it stability and "plow-through" on most shots, and is able to re-direct heavy shots with ease.  When hitting balls off-center (not that any of us do this), the weight and stiffness of the frame make it more forgiving, as the sweetspot is slightly enlarged from the extra weight.  Volleys caught out in front with little punch can still generate ample pace for putaways.  Serves are rewarded with extra MPH as well.

The string pattern is 16x19, and being less dense lets the slightly larger "squares" in in the stringbed to bite more of the ball.  This results in greater access to spin as you brush up or slice downwards.  It is also weighted at *9* points headlight, which counteracts the heft of the frame, and allows the head itself to be whipped through the zone more easily.  The overall feel of the RF97 is as close to a touring pro's racket as you're going to find on the market today.

The frame is relatively thin-beamed at 21.5mm/21.5mm/21.5mm and comes with a Wilson Premium Leather Grip, just as you might expect with any luxury product.

To get as close as you can to having the experience of playing with Roger's racket and play a little more like Fed (just a little more - they do not have magical powers), you should really try his hybrid string setup, known as Champion's Choice (what else would they call it?!). This is a pre-packaged hybrid set from Wilson that has half a set of Wilson Natural Gut in 16 gauge (for playability) and half a set of Luxilon's ALU Power Rough in 16 gauge (the textured and rough poly strings bite the ball even more and provide extra snapback for extra revolutions per second).

Disclaimer: We do not guarantee 8 Wimbledon titles, or even winning your club's annual tournament - your results may vary!