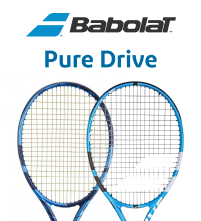 Want to hit more winners?! The new Babolat Pure Drive features a High Torsional Rigidity system, a tech that increases energy return to give you point-ending explosive power on every shot. The Pure Drive range is used by players such as Sofia Kenin from the United States, Amanda Anisimova from the United States, Fabio Fognini from Italy, Garbine Mugurza from Spain and Lucas Pouille from France.

Babolat launched the Pure Drive in 1994 and quickly established the benchmark for power. With every subsequent model, they’ve innovated and evolved to meet the demands of the game. The Pure Drive is one of the most popular and versatile racquets in the world and takes your game to the next level with point-ending explosive power and increased feel.

POWER: You want power, stop looking around. Whatever your skill level is, power is what made this racquet iconic. Not only it is used widely used on Tour, but this is also one of the bestselling racquets of all time because of its versatility bringing power in the palm of the hand of any player.

EXPLOSIVITY: You wish you had an extra pop when things get tough, here comes explosivity. When the intensity is high you can rely on your racquet to do exactly what you are longing for: produce a killing shot, even on an off-centered hit. A new lay-up has been developed to do exactly that, put a smile on your face… and a grin on your opponent’s one.

FEEL: You need to feel, now feel the difference. Yes, the feeling is important even in a powerful frame. We all understand that if you cannot control your shot, power is meaningless. Get ready for a new experience you will not only feel but also hear through this unique sound at ball impact.

HTR SYSTEM: :The High Torsional Rigidity (HTR) system is a new lay-up composition in the hoop of the racquet for increased rigidity to produce explosive winners at will.

The Babolat Pure Drive is one of the most versatile and popular power racquets in the world giving you your unfair advantage.