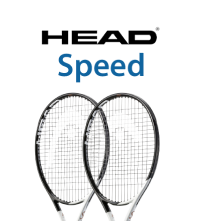 The Head Speed series offers a fast racquet for a fast game when winning is being that split-second faster.

The Speed Series racquets are engineered for advanced tournament players who are looking for optimal control and maneuverability for their fast-paced games while giving Junior players the ability to play fast and feel every shot with the lightweight version of the Speed racquet. The new look includes an asymmetric design making it elegant and clean with a matte and glossy finish and chrome details.

You can play fast while feeling every shot with a racquet that is part of the bestselling Speed series recommended by Novak Djokovic. As with the previous generation, the new update has Graphene which strengthens the frame, provides greater stability, and optimizes energy transfer from racquet to ball.

Winning is Being a Split Second Faster.

The racquet is built for speed and for a fast swing. The new updated Auxetic construction creates a sensational feel and sleek new design. Included is the HydroSorb Pro White Grip which presents a twin-channel system of two materials to ensure cushioning and airflow to provide for the perfect grip.

GRAPHENE INSIDE: Strategically positioned in most of our racquets.

With a Head Speed racquet, feel every shot and get more confident in your game. The Head racquet technology actively responds, giving real-time, super-accurate feedback. It really is sensational.