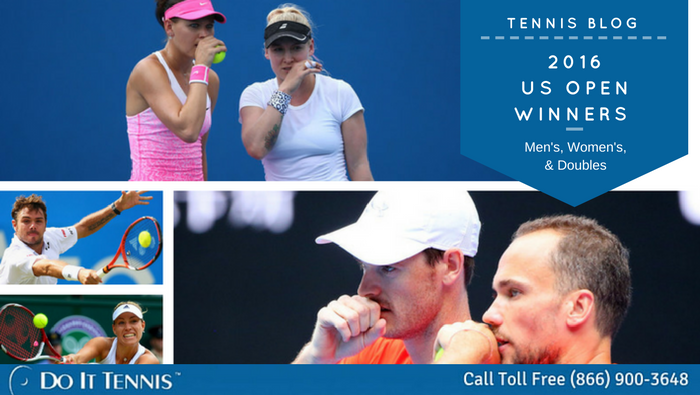 Two first-time singles champions were crowned as 2016 US Open Tennis Championship winners this year. But neither were a complete shocker. Stan Warwinka was truly the man against Novak Djokovic in the fierce men’s singles final. Angela Kerber fought back a truly spirited effort by Karolina Pliskova to take the women’s single title. Are these US Open winners a sign of the dawning of a new era at the very top of professional tennis?

Stan Wawrinka used rocket serves, pounding forehands and one the best one-handed backhands in today’s game to beat Djokovic in 4 sets 6-7, 6-4, 7-5 and 6-3. There were many 20 plus shot rallies with some amazing defensive plays as neither man let go of any point. Wawrinka and his Yonex V Core Tour G looked calm throughout the match. He frequently pointed to his head to reinforce the mental aspect of the tennis game.

Djokovic wielding a HEAD Graphene XT Speed Pro Tennis Racquet won 77% of his net points and always seemed to be in the match. Wawrinka just ground the 2015 US Open champion until the victory was his.

Djokovic will still be ranked the No.1 ATP player in the world with domination at tournaments throughout the season and wins at the Australian Open, French Open and the finals match at the US Open.

In the semifinals Wawrinka beat Kei Nishikori and his Wilson Burn FST to earn a place at the champion tennis court. Djokovic passed Gael Monfils in 4 sets, where Monfils seemed to give up and pat balls back at points in match.

Wawrinka had several grueling 4 and 5 set matches in the tournament. Djokovic had an easier path to the finals courts with several retirements by opponents.

Among the other ATP top 25 players Rafael Nadal and his Babolat AeroPro Drive was upset by 25th seed Lucas Pouille in the fourth round. Andy Murray fell to Nishikori in an epic 5 set battle in the quarterfinals.

Kerber snapped back halfway through the deciding third set to beat Pliskova for the women’s singles title 6-3, 4-6, 6-4. Kerber used her Yonex Vcore SI 100 to help her make the rebound.

Pliskova playing with a Babolat Pure Drive Play stunned favorite Serena Williams in the semifinal match 6-2, 7-6. Kerber beat Caroline Wozniacki, who plays with a Babolat AeroPro Drive PLAY in the other semifinal.

Kerber, seeded #2 at the US Open, has had a stellar 2016 Grand Slam lineup winning both in New York and at the Austrialian Open and losing to Williams at Wimbledon finals.

At 34, Williams is still playing strong with her Wilson Blade 104 with the Wimbledon win, a victory at the French Open and a finals appearance against Kerber at the Australian Open.

Men’s tennis doubles were won by Jamie Murray and Bruno Soares. The women’s tennis doubles champions were Bethanie Mattek Sands and Lucie Safarova. Mixed doubles was won by Rancho Santa Fe, CA’s own Coco Vanderweghe and Rajeev Ram.  Junior Boys Singles title was won by Felix Auge-Aliassime and Junior Girls Singles champion was Kayla Day from Santa Barbara, CA.  Check out all US Open winners and the key points in each match.

What’s your view about this year’s U.S. Open Winners??

Are the 2016 US Open winners a sign of a new era at the tennis championships? What top factors do you think made the difference for Kerber and Warwinka?