Australian Open Champions of the Past 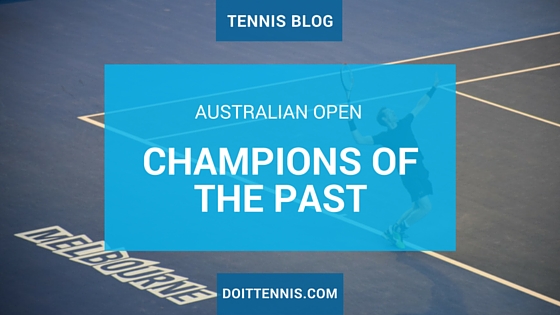 This year’s Australian Open is off to an exciting start! With Caroline Wozniacki and Rafael Nadal out in the first round, fans are left to wonder how much longer our tennis favorites will continue to grace the tennis courts. But as history dictates, this year’s excitement is nothing new.

Since 1905 the tournament has been played out in the beautiful city of Melbourne, Australia. There has also been a plethora of winners, some surprising and long awaited. Here are just some of the memorable wins of the Australian opens’ past 10 years.

2014: On the women’s tennis side, Li Na (using a Babolat Pure Drive) defeats Dominika Cibulková: Na beat Cibulková to win the final. She made it past Flavia Pennetta and Eugenie Bouchard. This would be Na’s final year.

2014: On the men’s side, Stan Wawrinka (using a Yonex VCORE Tour 97) defeats Rafael Nadal: Wawrinka battled it out against Nadal but ultimately proved to be the stronger tennis player that day and won the single’s title. It was not an easy road to the finals for him. He had to beat Novak Djokovic and Tomáš Berdych.

2013: Novak Djokovic beats Andy Murray who had beat David Ferrer to get him into the final. Both top players Djokovic and Serena Williams were knocked out rather early making the road to the finals a bit more unpredictable.

2009: Rafael Nadal defeats Roger Federer: After a tough battle in the semifinals by Nadal and Fernando Verdasco, Rafa went on to defeat the tennis great himself Roger Federer.

2008: Maria Sharapova defeats Ana Ivanović for the title. To get to the finals Sharapova had to defeat Jelena Janković in the semifinal.

2005: Marat Safin defeats Lleyton Hewitt: Marat Safin had to beat Roger Federer, who beat Safin in the in the 2004 final,  in the semi final to make it to the final and later play against Lleyton Hewitt for the win. This would be his last championship of his career.

This year we are excited to see some great thrills on the tennis court, starting with the Australian Open and are confident that there will be plenty of interesting matches.

What do you think will happen this year?
Visit any of our social media profiles and let us know what you think to be entered to win a $25 gift card in our Aussie Open Giveaway!