China Open Tennis Champions of the Past 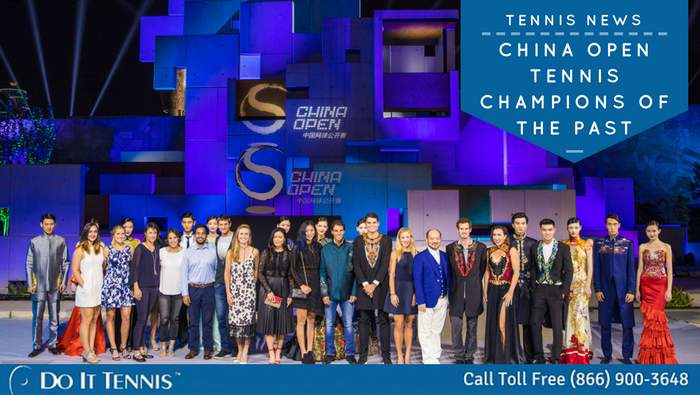 The China Open tennis championships continue this week in Beijing already with two big surprises. Novak Djokovic who was China Open Champion for the last 5 consecutive years did not appear withdrawing from the tournament due to injury. Serena Williams was shocked in a first round loss. Williams was a China Open champion in 2013 and 2005.

Started in 2005 is it one of the newer tournaments on the professional tennis circuit. The event is now attracting the top ATP and WTA players from around the world.

With Novak Djokovic and his HEAD Graphene XT Speed Pro Tennis Racquet nowhere to be found who will fill the vacuum?

Stan Warwrinka and his Yonex VCORE Tour G Tennis Racquet coming off a powerhouse win at the 2016 U.S. Open is also not competing in China.

Andy Murray with a tennis Grand Slam win at Wimbledon in 2016 is among the ATP Top 25 players that should be in the running. Can Murray seeded #1 for the tournament battle through his draw for a spot in the finals?

Rafael Nadal was tennis champion at the China Open back in 2005. Nadal is competing here with his Babolat AeroPro Drive again again this year. Still a top level ATP player can he go all the way with Djokovic not a factor?

Men’s singles China Open champions of the past

Women’s singles China Open champions of the past

The women’s draw doesn’t have a clear favorite. Serena Williams and her Wilson Blade 104 got carved up by China’s Shuai Peng in a first round shocker at 7-5 and 6-1. Williams was a China Open champion here in 2013.

Garbine Muguruza won at the China Open tennis championships last year. Playing strong in 2016 with a championship trophy at the 2016 French Open.  She is now is the second round at the tournament.

Angelique Kerber is coming off a big win at the U.S. Open Tennis Championships. Kerber seeded #1 in China, will use her Yonex Vcore SI 100 will help her win the trophy.

Top-ranked Agnieszka Radwanska, is also well positioned. Can Radwanska rain down winners on her opponents with a Babolat Pure Drive Lite 2015 ?

Simon Halep has also been playing well all year, She will firing away with a Wilson Burn FST 99 Tennis Racquet

Women’s singles China Open tennis champions of the past

Keep up with the tennis action and schedule at the China Open tennis championships.
We love tennis as much as you do. During and following the matches in Beijing you can always get our tennis news updates.

With Djokovic and Williams out who is your pick s it a year for the favorites at the 2016 U.S. Open tennis championships? Do you think any Chinese player has a chance to knock off another top-ranked player?