Choosing the Right String Pattern for Your Tennis Racquet

filed in Tennis How To 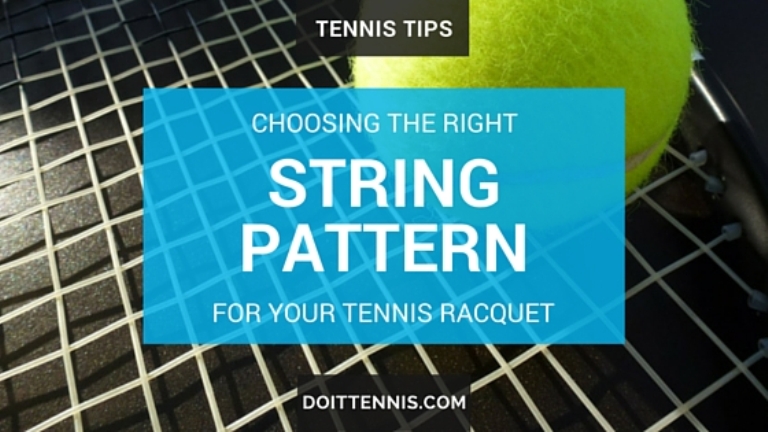 Your frame and strings are the most important components of your tennis racquet; however, choosing the right string pattern with the right tennis strings can help or hinder your game just as much.

The denser 18x20 pattern is known for providing consistency and directional control. This string pattern is best on a tennis racquet with a large head, as the density of the string bed requires more power behind your shot; and a smaller head size will only further increase the density thus demanding even more power and speed to get the ball over the net.

For those who tend to break strings often, this more dense stringing pattern increases tennis string durability as ball impact is distributed more evenly and there is less movement within the string bed.

The 16x18 stringing pattern is known for generating more power and spin. Open patterns, in general, provide more elasticity in the string bed than a closed, denser pattern. What this means is that when a ball hits a tennis racquet strung at 16x18, the string bed will absorb the ball and provide a stronger rebound, requiring less power and speed behind your shots. For that reason, open string patterns are considered more arm-friendly.

Those who tend to hit with a flat shot, but want to start using spin, may want to consider an open tennis string pattern on a racquet used mainly for practice.

Other Factors: Tennis String and Tension

As mentioned, head size can affect the amount of power, or lack thereof, that a certain string pattern provides, but string weight and tension also play an important role.

Adding a thicker string to an open pattern can close the gaps a bit, causing the string bed to perform a bit more like a closed pattern. The opposite is true in adding a thinner gauge to a more dense string pattern; you open up the string bed, creating a bit more elasticity and power. The increased string friction will also generate more spin, but not as much as if you went to an open string pattern.

These seemingly minor adjustments might just make the difference between loving your new frame and wishing they still made the one you’ve been using for the last decade. Don’t hesitate to call our tennis pros if you have questions regarding what string pattern would work best for you and your tennis racquet.

What are your experiences with tennis stringing patterns?
Join the conversation on Facebook or Twitter and let us know how you string your racquet.