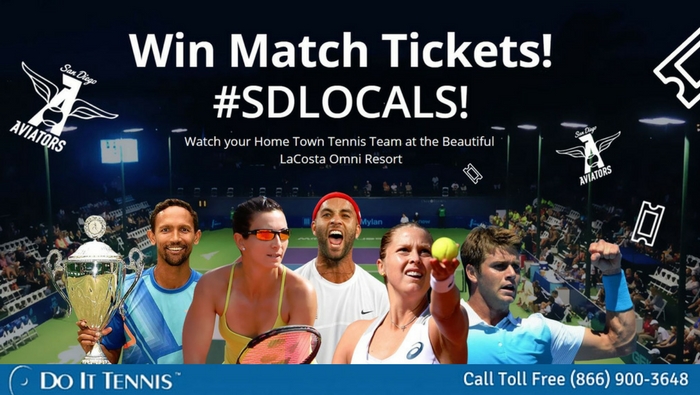 The San Diego Aviators lead the Orange County Breakers 2 matches to 1 in the raucous opening series of the 2016 World Team Tennis season. Each team match was hard fought with several keeping teams in contention to the last game or even point. The concentrated season is a chance for tennis professionals to stay in shape in the lull after Wimbledon and the run up tournaments before the 2016 U.S. Open Championships.

WTT matches operate under a unique cumulative scoring system with a point given for each game won that keep both teams in contention right to the last match and keeps the action moving. There are 5 single set matches for men’s and women’s singles, men’s and women’s doubles and finally mixed doubles. Winning five games wins the set with a tiebreaker at 4-4.

• WTT Match 1 In an incredible close contest the San Diego Aviators won 20 games to 19 when Raaven Klaasen and Darija Jurak won the last point of the tiebreaker in the last mixed doubles set to secure the victory at 5-4. In other highlights in a tough men’s match Dennis Novikov (Breakers) def. James Blake (Aviators) 5-3. Dynamo Nicole Gibbs (Breakers) def. WTT newcomer Shelby Rogers (Aviators) 5-2 in women’s singles. Blake bounced back in men’s doubles when he and Raven Klaasen (Aviators) def. Dennis Novikov and Scott Lipsky (Breakers) 5-2. Roger and Jurak won their women’s doubles match against Gibbs and Alla Kudaryavtesa. Fans at the match were treated to an appearance by one of tennis’ all time great and multiple Grand Slam winner Rod Laver. Rocket Rod, who lives in the North County area of San Diego, attended the match held at the Omni La Costa Resort and Spa in Carlsbad, CA.

• WTT Match 2 Both teams headed up to the Orange County Breakers home court at the Newport Beach Tennis Club for the second match. The 22-20 victory was secured by the Breakers Steve Johnson who won in the final set tiebreaker over Ryan Harrison in men’s singles. Earlier in the evening Alla Kudryatvseva/Scott Lipsky won the mixed doubles. Nicole Gibbs beat Shelby Rogers in the women’s singles. Harrison and Raven Klaasen won the men’s doubles. Darija Jurak and Shelby Rogers beat Gibbs and Kudryavtseva in the women’s doubles. For yet another close contest,

• WTT Match 3 The Aviators appeared to mathematically lock the win mid-way through the 4th set contest leading by 10 games with 8 to play. But World Team Tennis founder Billie Jean King innovative “extended play” kept the fifth set going into overtime and the crowd fired up. Klaasen and Jurak who had lost the final set by 4-5 needed to wait until they won at least 2 games in a row to finish the match. In other matches Shelby Rogers (Aviators) finally got tuned in on singles and spanked Nicole Gibbs (Breakers) 5-1 in the women’s singles set. Ryan Harrison (Aviators) beat Dennis Novikov (Breakers).  Harrison/Klassen (Aviators) beat Lipsky/Novikov (Breakers) in men’s doubles. Gibbs/Kudrytavtseva won over Jurak/Rogers. Funnyman and actor Rob Schnieder was in the stands at the La Costa Resort and treated everyone to crazy commentary and play by play during the match halftime show.

The San Diego Aviators will finish there series against the Orange County Breakers on August 3rd. They will then be back in Carlsbad, CA to face the New York Empire under coach Patrick McEnroe. The rest of the Aviators season will be played through August 13.

What do you think of World Team Tennis scoring system? Who is your favorite among the San Diego Aviators?