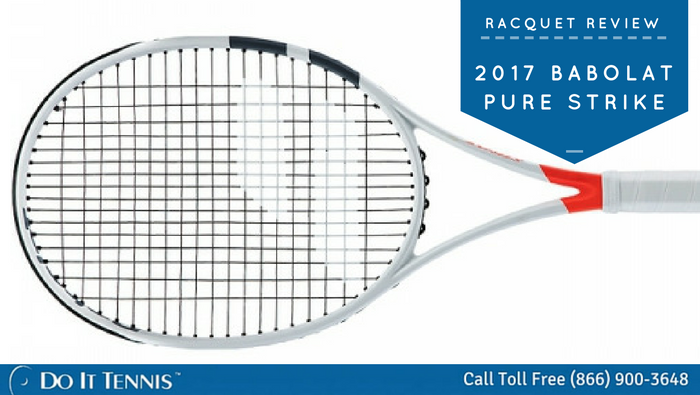 If you’re ready to get wild and be the attacker on the tennis court the new Babolat Pure Strike tennis racquets could be your best choice. It’s the latest in the Babolat Pure Strike series of tennis racquets. It was developed in partnership with Babolat’s top-ten ATP tennis player Dominic Theim and input from over 200 Babolat tennis ambassadors through their intiative #projectone7. Theim created a stir when he appeared at the 2016 U.S. Open Tennis Championships with the new stark white and orange frame version. The new Pure Strike series used a hybrid elliptical head and more square throat beam for both head speed and shot stability. It works for players that are typically on the offensive or for those players who want to become more assertive in their tennis matches.

In wide release this month the 2017 Babolat Pure Strike is getting positive reviews.

“A worthwhile update that delivers on the promise of the original..” Tennis.com on the Babloat Pure Strike 16x19 model (read the full review)

Let’s get to the Babolat Pure Strike Series breakdown:

Babolat Pure Strike 100 Tennis Racquet
For the intermediate player looking for a control racquet that offers lots of racquet head speed and spin potential the new 2016 Babolat Pure Strike 100 could be the perfect racquet. The new Pure Strike frames come with FSI Power technology which positions the string pattern to optimize the most spin and power potential from the racquet. The Pure Strike Team also comes with Babolat’s Hybrid Frame Construction that blends elliptical head and square beam racquet frame shapes to create a combination of racquet pop with a traditional feel.

Babolat Pure Strike 16x19 Tennis Racquet
The new 16x19 string pattern 2016 Babolat Pure Strike tennis racquet offers the ideal balance between both response and precision. With a 98 square inch head size it will work best for intermediate to advanced tennis players. It also has a square & elliptical EVO-Beam hybrid construction that features a slightly thicker beam than its predecessor which provides for a more powerful and stable racquet. The X-Sider technology increases the sweet spot by 10% to bring forgiveness on off-center hits. Babolat’s new FSI Power technology now gives this updated Pure Strike 16x19 a wider string pattern in the crosses allowing for more spin, power and comfort.

Babolat Pure Strike Team Tennis Racquet
If you are an advanced beginner to intermediate player ready to attack more with precision the 2016 Babolat Pure Strike Team is a great option. The racquet delivers the control, spin and feel of a performance racquet but at a lighter weight. This version is lighter and easier to produce racquet speed than the other Pure Strike family of racquets. As a result you do lose some plow through power but you gain racquet speed and spin potential. These new Pure Strike frames come with FSI Power technology which positions the string pattern to optimize the most spin and power potential from the racquet. The Pure Strike Team also comes with Babolat’s Hybrid Frame Construction which blends elliptical and square racquet frame shapes to create a combination of racquet pop with a traditional feel.

What’s Your View on the 2016 Babolat Pure Strike Racquet Series?

Join the tennis conversation on Facebook or Twitter and add your tennis racquet review of the 2017 Babolat Pure Strike. Or simply call our tennis string specialists at 866-900-3648 to learn about the complete range of Babolat tennis racquets.