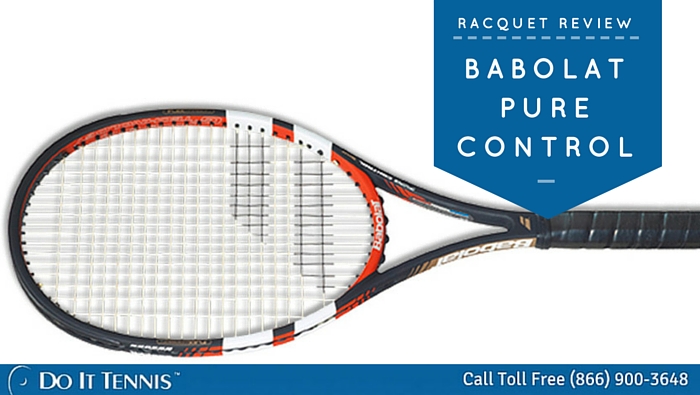 First of all I did not find this tennis racquet esthetically appealing. Either do the graphics in black or in red or in a real orange color scheme that is recognizable as such. This whole muted faux orange thing was just annoying and off putting from the start. And that feeling continued as I started to hit with this frame.

The Pure Control tennis frame is a standard 27 inches long with a 98 square inch head. It weighs 10.9 ounces strung and has the now common 16 X 20 open string pattern. The theory behind using this pattern is that power should be more under control, and that spin should be easily accessible. I guess that is why they call it a theory.

I had problems controlling the tennis ball with this racquet from the very beginning. I was spraying forehands up the line wide and just missing the court completely when I went for any kind of backhand angle. My game is a little flattish and it is almost like the open string pattern made my game more so, not less so.

I just didn’t like the way the ball came off the strings using this frame. It was almost as if the ball was tumbling a little bit, a very unsatisfactory state of affairs in my mind. It was a little better outcome with regard to serves and volleys and lobs and overheads. This frame just felt a little wide on groundstrokes and approach shots; but anything that you hit over your head, or had the racquet over your wrist at contact, the ball strike felt find.

I think that this racquet is designed for the 4.5 market, and I for sure hit the ball harder and flatter and attack more often than any of my friends, associates or clients who play at that level. Maybe if you are spinning the ball as a basic style this tennis racquet will work with you, and then for you. But it was very problematic for me. I would be interesting in seeing how other players experienced hitting with this frame.