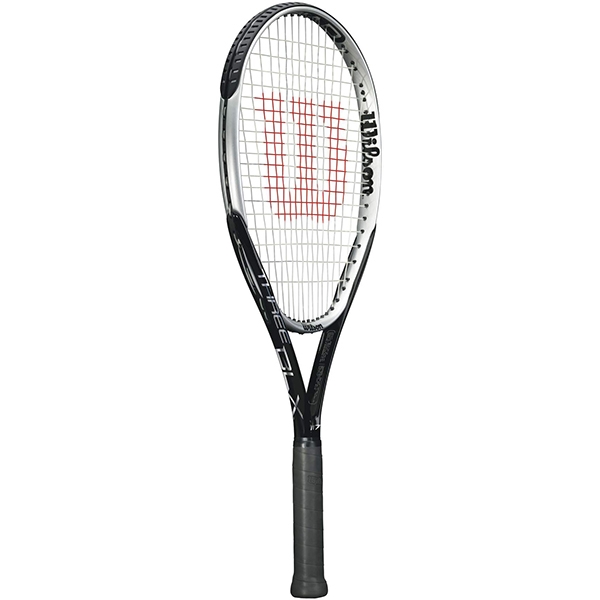 The WILSON BLX THREE is new for 2013, and is an update to their long-time ‘hammer’ series of tennis racquets.

It also incorporates Wilson’s “Triad” design (see below) to maximize power, control, and comfort.  Hammer racquets have always been popular with a broad spectrum of player styles and skills.

The Wilson BLX THREE has a classy silver and black paint scheme.  (It would go well with your Rolls Royce Siver Ghost!).  Its graphics are clear, simple, and clean.  The racquet head (hoop) is an oval shape and the main strings are laid out in a fan pattern.  When players first observed the racquet they thought it had a larger head than its actual 117 inches.

1) Basalt (BLX):  Basalt fibers are woven into the frame to reduced unwanted frequencies (vibrations) and to provide better feedback and feel;

2) Hammer:  maintains the majority of racquet mass (weight) in the frame’s head (head-heavy balance) to increase power and stability.  Weight is also reduced in the handle and shaft which creates a larger and higher “sweetspot”.

3) Triad Design (power, comfort, control) with Iso-Zorb:  The racquet hoop and handle never touch—Iso-Zorb, a Wilson polymer, is inserted between the sections.  This allows for maximum power from the racquet head, while keeping comfort a top-priority.  And the handle, due to increased stability, gives better feel and, therefore, control.

4) Amplifeel 360:  The handle is no longer merely foam.  Wilson has now used Basalt as the handle material, which results in less weight, more stiffness, and greater strength.  Bottom line:  more feel with less shock and vibration.

The WILSON BLX THREE has a 117” head and weighs 9.2 oz. unstrung.  It has a string pattern of 16 mains and 19 crosses.  It is 3 pts. head-heavy (8 pts. strung—like a hammer!)  It has a variable width beam (cross-section) which measures 26.5mm/28mm/25mm wide.  It is rated by Wilson as appropriate for players with compact and slower strokes. It is an extended-reach racquet measuring @ 27.5” in length.  It is designed to be on the higher-end of the stiffness scale.

I quickly discovered that the WILSON BLX THREE does a lot of the “work” for you!  No need to get excited or swing super hard—a steady, smooth stroke is all you need.  The ball easily reaches the baseline—and with pretty good pace.  I felt that I could really, really RELAX and enjoy the game.  The WILSON BLX THREE instantly inspired confidence on groundstrokes.

Hitting a volley with the WILSON BLX THREE was made easier due to the racquet’s light weight and larger head size.  It delivered excellent power and very good accuracy.  I noticed that it was very forgiving on off-center hits—the racquet never wanted to twist in your hand.  And the extended reach made it easier to poach!

The head-heavy balance of the WILSON BLX THREE added some real “pop” to overhead smashes.  It took a few overheads to get the timing correct (I am not accustomed to head heavy racquets) but once I was dialed-in, this racquet performed flawlessly.

The WILSON BLX THREE was also excellent in delivering accurate and powerful serves.  I could really “feel” the ball coming off the racquet which resulted in good control.

The WILSON BLX THREE is surprisingly good at creating spin—IF you hit with power.  This racquet is designed for players with slower strokes who (probably) hit flatter shots.  But I soon realized that with some gusto in my swing this racquet really did a good job creating top spin.

My first impression of the WILSON BLX THREE was that of “oh boy—another game improvement racquet test”.  After only a few minutes of hitting I realized that this racquet has a little bit of something for nearly everyone.  Want deep penetrating shots?  Check.  Want good feel and comfort?  Check.  Want mobility and quickness a light racquet offers?  Check.  Want a little assistance in the power department?  Check.  Want massive spin?  Ummm—possibly!  The WILSON BLX THREE is a surprisingly versatile racquet that is a good choice for newer players and/or players desiring their racquet to do more of the work while playing.  After all—why sweat more than your opponent?