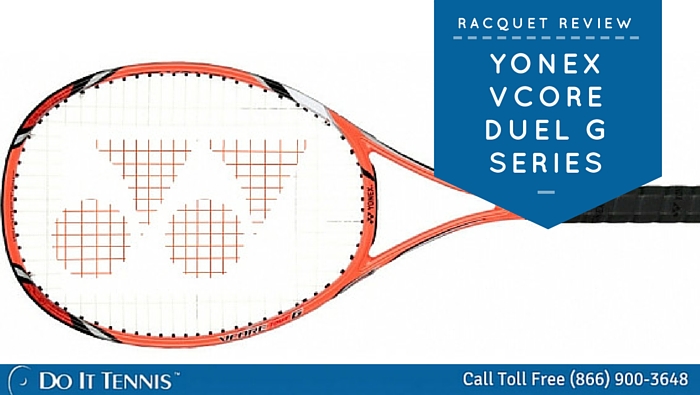 Calling all tennis power hitters and those who want to crush the ball. The new Yonex VCore Duel G Series is here. The series is an upgrade to the VCore Tour tennis racquets. They are built especially for aggressive advanced players who like to unholster and fire from the baseline.

The VCore Dual G series is now available in three versions for different play styles. All models are constructed with Tough G Fiber that adds more flex and repulsion in the shaft for a heavier spin for 4.5+ NRTP tennis players.

The 100 square-inch head size model is a bit lighter at strung weight of 11.1 ounces with a larger, slightly more forgiving sweet spot, a 315 swing weight and a 4pts head light balance.

There are two 97 square-inch head size models, both with 7 pts head light balance. The first 97 model is a 310 gram swing weight model at 10.9 ounces strung. The heavier duty 97 model is 330 grams swing weight, 11.6 ounces and slightly stiffer is your other choice.

All three models are a standard 27 inches in length and have a recommended string tension range of 50-65 pounds. They also all have the same 16 main by 20 cross string pattern.

Yonex is The Choice of Pro Tennis Players

Several top-ranked tennis professionals have completed their own tennis racquet review and Yonex is the pick.

ATP star and power-hitter Stan Wawrinka plays with a version of the Yonex VCORE Duel G. Wawrinka is joined on the Yonex team by 20 year old Australian up-and-comer, Nick Kyrgios. Kyrgois is ranked 20th following his ride to the semifinals at the Miami Open earlier in April.

Want More on the Vcore Dual G or Do a Play Test?

Contact our tennis racquet specialists at (866) 900-3648 with any questions or a chance to play test this racquet.

Have you ever been on the receiving end of an aggressive ball crusher on the tennis court? How did you fight back?