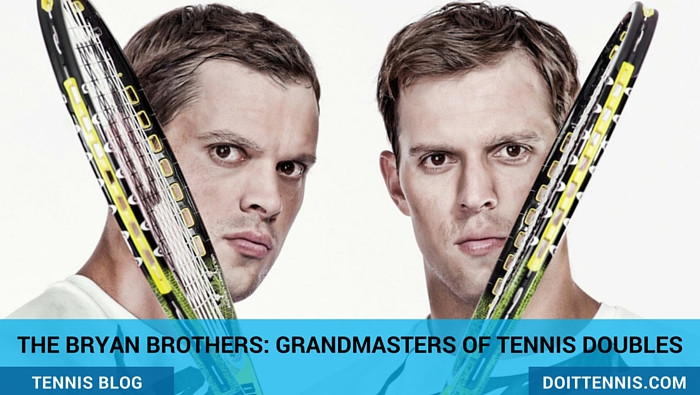 Prince tennis, a key sponsor of the Bryan brothers, has developed a special white and gold design edition racquet bag to honor Mike and Bob. This 12-racquet bag, which includes imprints of some of their medals and signatures, is the largest of the Tour Team Collection racquet bags. Like all Prince Tour Team 12 Pack Bags it is packed with extra performance features. The bags come with foamed racquet protector sections, zoom zippers with nylon pulls and water repellant/dirt resistant PVC and nylon surfaces. The Team Collection is the choice of Prince touring pros. It is a good choice for tournament or recreational players looking for that extra storage space for all their gear. You can add some clothes or accessories if you put a few less racquets inside. Adjustable backpack straps make this bag manageable to transport.

Growing up with the Bryan Brothers

Identical twins Bob and Mike were born three minutes apart in 1978 in the town of Camarillo in sunny Ventura County in Southern California. They started playing doubles tennis early. Bob and Mike won their first doubles tournament at age 6, in a 10-and-under event. They attended Mesa Union School (Somis, California) for elementary and junior high school, then Rio Mesa High School in Oxnard, California. They had an outstanding junior career, winning well over a hundred junior doubles titles together.

They turned pro in 1998, capturing their first ATP win at Atlanta the same year. After several years winning multiple professional and ATP Masters tournaments, in 2003 they got their first Grand Slam win at Roland Garros for the French Open.

Even at 38 years old, Mike and Bob Bryan continue to play at the highest caliber of tennis doubles. In 2016, they had a finals appearance at the French Open, win at the Barcelona and Rome and the U.S. Clay Court championships. They made it into the quarterfinals of the 2016 Wimbledon tennis men’s doubles championships. They are now tuning up for the 2015 U.S. Davis Cup.

In recent years when off the tennis court Mike and Bob have teamed up with the singer David Baron to form the Bryan Brothers band to jam on tour stops, charity events and clubs. They’ve even had guest appearances by top tennis talent Novak Djokovic and Andy Murray.

Another focus of Mike and Bob is The Bryan Bros. Foundation, a non-profit 501c3 organization, dedicated to helping support and grow the dreams of children in Ventura County, California and around the world. The Foundation’s mission is to identify and support charities and causes that help at-risk youth survive and thrive. They seek out specific families and children in need, working with them directly to ensure that they have the opportunities they need to succeed. In everything we do, we will promote the ideals of sports, and tennis in particular, to emphasize the values of hard work, dedication and perseverance.

Every recreational tennis doubles players can take inspiration from the Bryan brothers’ drive, tenacity and success. There a many ways to improve your tennis doubles strategy.

With the Bryan brothers now both at 38 do you think they can continue to win tennis doubles Grand Slam titles and major professional tournaments?