U.S. Open Tennis Champions of the Past 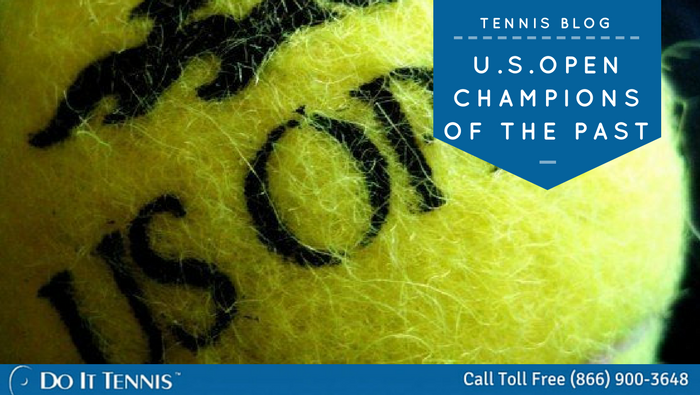 One looming question for the men’s singles draw is if Novak Djokovic winner here in 2015 (wielding a HEAD Graphene XT Speed Pro Tennis Racquet) can get back on track following his surprising exit at Wimbledon? Djokovic had been the master of the 2016 season until heading to England.

Roger Federer was stopped short by Djokovic in the 2015 finals, has a chance to regain his edge with his Wilson Pro Staff RF97 Autograph Tennis Racquet.  Federer, a five-time U.S. Open tennis champion can never be counted out for an appearance in the finals at the Arthur Ashe stadium.

Martin Cilic the 2014 U.S. Open tennis champion clearly couldn’t find the magic again this year. Jock Sock knocked out Cilic in the 3rd round. Kei Nishikori who lost to Cilic in the 2014 final is hoping his Wilson Burn FST gives him another chance.

Andy Murray, with a powerful tennis Grand Slam win at Wimbledon in 2016 is among the ATP Top 25 players that should be in the running. Can Murray seeded #2 for the tournament and who won in New York in 2012 battle through his draw for a spot in the finals?

Rafael Nadal and his Babolat AeroPro Drive has been a tennis champion earning both the 2013 and 2010 U.S. Open titles. But Nadal won’t hoist the cup in 2016 after being upset by 25th seed Lucas Pouille in the fourth round.

Men’s singles U.S. Open tennis champions of the past

For the women’s singles title the odds are enormous against a repeat of last year’s all-Italian final. The 2015 U.S. Open tennis champion Flavia Pennetta and feisty Roberta Vinci put on a good show but it wasn’t a particularly memorable grand slam tennis match.

Tennis legend Serena Williams has dominated the U.S. Open played at the USTA Billie Jean King National Tennis Center.  With six U.S. Opens titles already to her name and a solid win at this year’s Wimbledon, Williams is odds on favorite to continue her winning ways slinging her Wilson Blade 104.

Angelique Kerber who lost to Williams at Wimbledon is looking for revenge. Kerber seeded #2 For the U.S. Open, will use her Yonex Vcore SI 100 will help her make the rebound.

Seeded #4, Agnieszka Radwanska, is also well positioned has played well this year. Can Radwanska rain down winners on her opponents with a Babolat Pure Drive Lite 2015?

Simon Halep has been playing well all year, She will firing away with a Wilson Burn FST 99 tennis racquet.

Women’s singles U.S. tennis champions of the past


Since 1881(1887 for women), there has been a U.S. Tennis Championship. The open era for the tournament started in 1968 and is now one of the four Grand Slam crowns along with the Australian Open, French Open and Wimbledon. Keep up with the live scores to see if your picks advance.

Is it a year for the favorites at the 2016 U.S. Open tennis championships? Who would you pick as a likely upset for in the men’s or women’ draws?