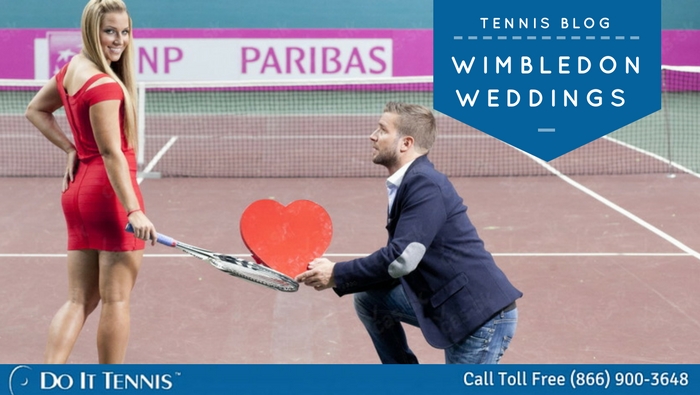 Is the grass? This year following and even during the 2016 Wimbledon tennis championships three top tennis professional Dominka Civuklkova, Ana Ivanovic, and even youngster and Ranch Santa Fe, CA resident Taylor Fritz made their intentions clear and either wed or got engaged. Do two weeks among the stuffy traditionalists at the All England Lawn Tennis & Croquet Club influence the couples to make it legal? Or could it be the mandatory whites that inspire the potential brides and their beaus to take the plunge?

• Dominka Civulkova got married on the day of the women’s finals on July 9 to fiancé Miso Navara. She probably had more than a normal brides jitters when she unexpectedly made it to the quarterfinals and was about to cancel the event. Elena Vesnina ended that problem when she ended Civulkova’s run with a 6-2, 6-2 win.

• Ana Ivanovic and soccer star boyfriend Bastian Schweinsteiger were widely reported to have become engaged during the warmup to the Wimbledon tournament. Although following the tourney Ivanvonvic was still be coy. Ivanovic’s mind was clearly elsewhere when the former WTA No.1 was ousted in the first round by qualifier Ekaterina Alexandrova.

• Taylor Fritz: At just 18 and in his debut season as a ATP professional player, Fritz got engaged to girlfriend and junior tennis player Raquel Pedraza. The San Diego area young gun played in 2015 with the San Diego Aviators made his intentions clear in Paris just prior to hitting the grass courts in England.

Was the reason-grass, traditions or whites that made these players made a plan to go down the aisle? Any nuptial projections for the 2017 Wimbledon tennis championships?