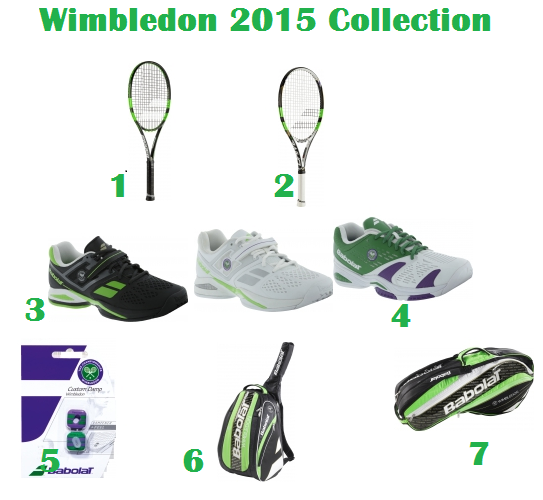 Babolat has released a special commemorative tennis collection for Wimbledon 2015. So this year even if you aren’t lucky enough to actually be at the big lawn tournament, you can at least feel like a part of the action! From tennis racquets to dampeners, you can fully deck yourself out with the Wimbledon colors.

1) Babolat Pure Strike 16X19 Wimbledon Racquet: Response meets precision in this beautiful racquet, with all the technology you know from the original Pure Strike, and a complete cosmetic overhaul. This tennis racquet will very likely make you wish you were playing on the grass.

4)Babaolat’s SFX Wimbledon Men’s Tennis Shoes:  Same high-performance features and comfortable feel, but with the trademark green, white and purple colors in honor of Wimbledon. The Babolat SFX tennis shoes have a durable upper, cushioned midsole, and performance outsole for players who spend a lot of time out on the court.

6)Babolat Pure Wimbledon Backpack: This Limited Edition tennis backpack has isothermal protection, and can carry up to two tennis racquets and a change of clothes. This is a great backpack for an afternoon on the tennis court, especially if you happen to ride your bike or walk to it.

7) Babolat Pure Wimbledon 6 Pack Tennis Bag:  If you need to store more tennis racquets than the backpack in #6, this bag stores up to 6 racquets, with some space to spare. You will come to appreciate the two different racquet compartments, and additional two storage compartments; it even has padded backpack straps for easier carrying.  Last but not least, there’s also the fun pop of green and the gold Wimbledon embroidery.

So while the excitement of Wimbledon is just heating up, you can all but put yourself in the middle of the action with Babolat’s 2015 Wimbledon collection!

To see the full Babolat Wimbledon 2015 collection, check out this video review by Do It Tennis!