Wimbledon Tennis Champions of the Past 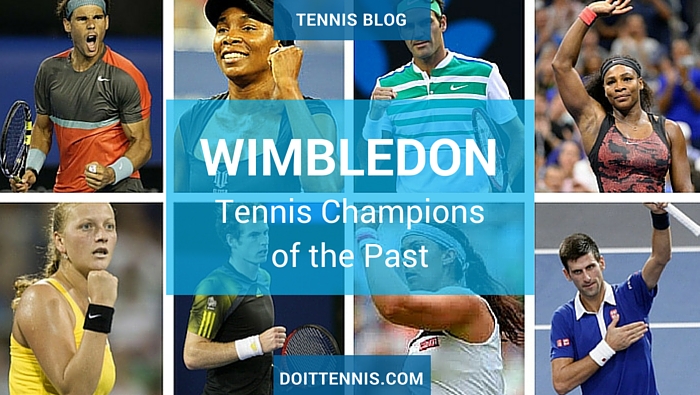 The world’s top tennis professionals have unpacked their whites and are headed to the grass courts for the 2016 Wimbledon tennis tournament. The storied All England Lawn Tennis & Croquet Club has been the site of championship matches for 138 years and has crowned many legendary Wimbledon tennis champions of the past.

With the single exception of British favorite Andy Murray in 2013, three men, Novak Djokovic, Roger Federer and Rafael Nadal, have dominated Wimbledon men’s singles championships for more than a decade. In fact in one or two of this tennis triumvirate have appeared in every singles finals back to 2003.

Roger Federer, who was stopped short by Djokovic in the last two Wimbledon finals regain his edge with his Wilson Pro Staff RF97 Autograph Tennis Racquet . Federer has appeared in an astonishing 10 of the last 13 singles finals

Andy Murray, always the home crowd favorite, is among the ATP Top 25 players that should be in the running. Can Murray battle for a spot on the finals tennis court with the fans at his back?

Rafael Nadal and his Babolat AeroPro Drive is known best as a clay court champion. But Nadal has hoisted the cup as Wimbledon champion twice and was a singles finalist in three other years.

Wimbledon men’s singles tennis champions of the past

When she is on Wimbledon can be the Serena Williams show. She has won here four out of the past seven years. Can Serena Williams repeat her recent 2015 win, slinging her Wilson Blade 104?

Garbine Muguruza who beat Williams in the 2016 French Open to become champion, will be looking to continue her Grand Slam run in England. Muguruza met with Williams at the 2015 Wimbledon women’s single final so she can also play strong on grass.

Petra Kvitova, the women’s singles champion in both 2014 and 2011 should be in the mix with her Wilson ProStaff 97 tennis racquet.

Wimbledon women’s singles tennis champions of the past

This Grand Slam tennis tournament is the great-great granddaddy of them all. Since 1877, the All England Lawn Tennis & Croquet Club has hosted the championships for both men and women. Strawberries and cream and tennis court grass cut exactly to an 8 millimeter height are all part of the Wimbledon tennis championships.

Want to know all Wimbledon tennis champions of the past or as only the English could describe it as members of the “Rolls of Honour”?

Keep up with the all the current tennis action, draws and results at 2016 Wimbledon Tennis Championship tournament website.