Drop-Weight Stringing Machines: How Low Tech Can Be Just As Impressive As High Tech 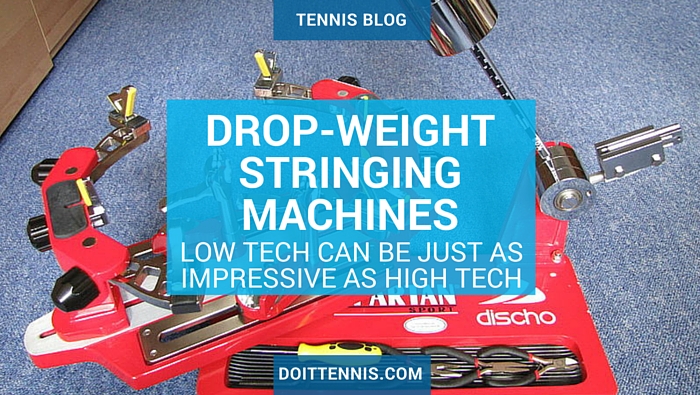 When you look at what the market has to offer in tennis equipment, it's easy to be dazzled by high tech products like the Tecnifibre TF 8000 stringing machine. If anyone from the movie 2001: A Space Odyssey played tennis, this is probably the machine that they used to string their racquets.

In the end however, all that really matters is that the racquet is strung properly and you don't need high tech equipment to do it right. A drop-weight machine can do the job just fine, albeit more slowly.

This comparison between high and low end stringing machines reminds me of a couple of middle school classmates I grew up with who played tennis. I've changed their names for their protection and mine.

Ken was a minimalist when it came to tennis because he had to be. He came from a blue collar family where tennis was a foreign language. His tennis gear consisted of cotton t-shirts, shorts and sweats and some Converse All-Stars that he bought at K-Mart or Sears. It's probably where he also bought his racquet—if it wasn't second hand.

Mark, on the other hand wore expensive clothing, had the nicest gear and a state-of-the-art racquet, which was strung by a pro at the country club.

The funny thing was that whenever these two played tennis against each other, Ken not only always beat Mark, he usually embarrassed him.

The moral of the story is that if you don't have the skill, being fancy isn't going to make that lack of skill any better, and if you have the skill, it doesn't matter what equipment you use.

It's no different with stringing machines. If you don't know how to string a racquet, using an $8000 machine isn't going to make your sorry excuse for racquet stringing look any better. At the same time, a professional with a drop-weight machine can work wonders.