French Open Tennis Champions of the Past 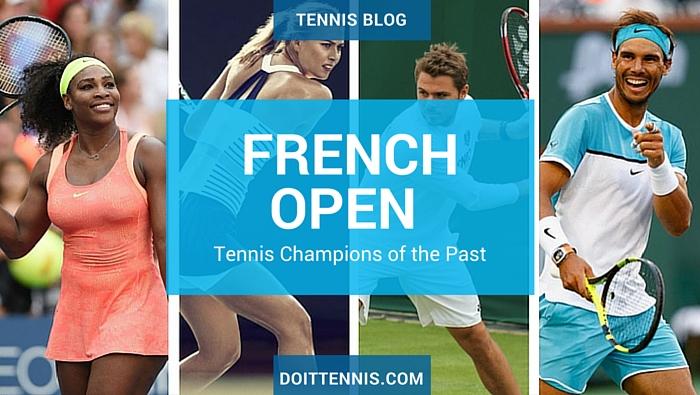 As the qualifying rounds at the 2016 French Open on the red clay at Roland Garros continue, there are more unanswered questions about who should be favored in both the men’s and women’s draws. Grab some 2016 Babolat French Open tennis gear and get ready fill in the blanks yourself.

Can Novak Djokovic (wielding a HEAD Graphene XT Speed Pro Tennis Racquet) who has dominated tournaments this year, win after coming so close in the 2015 finals against Stan Warwrinka?

Rafael Nadal and his Babolat AeroPro Drive will be a factor. Nadal has long dominated the French Open with 9 tennis singles wins from 2005 through 2014. Can Raffy regain his mojo to add an astounding number 10?

Wawrinka the 2015 winner with a Yonex VCORE Tour G Tennis Racquet has to be counted as powerhouse to watch and in the mix. Can he repeat?

Roger Federer, who won here in the 2009, with his Wilson Pro Staff RF97 Autograph Tennis Racquet should be a contender as he continues to build back. He was seen practicing but announced just this morning that he will not compete. Who will take his seat?

Andy Murray seeded #2 is also among our favorites in the ATP Top 25 players. Can Murray battle a spot on the finals tennis court?

And don’t forget Kei Nishikori who is ready to fire with his new Wilson Burn FST. He has gone toe to toe against Djokovic. Is this his time to go all the way?

French Open men’s singles tennis champions of the past:

Can Serena Williams repeat her 2015 French Open win, slinging her Wilson Blade 104? Williams is seeded #1 for the sixth time and won in 2013 at Roland Garros.

Maria Sharapova, still battling doping abuse allegations, won the women’s tennis singles bracket in 2014 and 2012 but is not on this year’s entry list. With Sharapova out, who will challenge Williams?

Tourney #2 seed Agnieszka Radwanska, is well positioned playing with a Babolat Pure Drive Lite 2015. Can she become a giant killer against Serena?

Simon Halep will fire away with a Wilson Burn FST 99 Tennis Racquet. Coming off a championship at the Mutua Madrid Open in Spain can Halep create more magic?

2016 Miami Open champion Victoria Azarenka will use a Wilson Ultra 97 Tennis Racquet at Roland Garros. Does Azarenka have enough power to prevail?

French Open women’s singles tennis champions of the past

Curious about all the singles and doubles tennis champions who won the French Open all the way back 125 years? You’re clearly a clay court fanatic.

This Grand Slam tennis tournament is the premier clay court event for both ATP and WTA players in the 2016 tennis season and its history and origins are deep.

The first ever men’s French Championships were held in 1891. Originally reserved for members of French clubs and held on the courts of the Stade Français club in Paris. The women’s singles were added six years later. It was not until 1925 that the French Tennis Federation opened the event to the best foreign players. The French Internationals were born, and staged alternately at Stade Français and the Racing Club de France until the first Roland-Garros stadium was built in 1928.

The arena was named after Roland Garros, a pioneer of aviation who was killed in combat during the World War I. The tournament was opened to professionals in 1968 and Roland Garros underwent major renovations and expansions in the 1970s, 1980s and 1990s including the completion of two center stage courts. It is now one of the four grand slams to the tennis tournament calendar.

Keep up with the all the tennis action, draws and results at 2016 French Open Tennis Championship at Roland Garros tournament website.

Can crowd favorite Rafael Nadal regain his place at the top at Roland Garros? Who among the women is your choice for the singles French Open title?