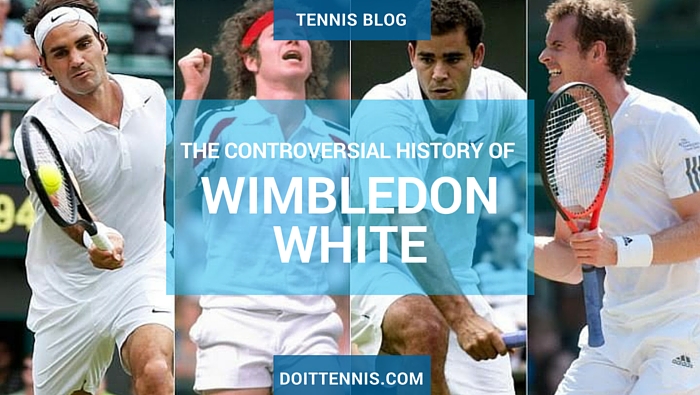 One of the charming, and for pro tennis players sometimes infuriating, aspects of the Wimbledon tennis tournament is the very British requirements for Wimbledon white apparel. The origin of the whites apparently goes back to the late 1800s, when it was improper to have ladies perspire or show sweat stains. To mask that apparent outrage they started wearing all white. And it was in cotton flannel. Good thing England is cool and rainy-even sometime during the famous fortnight. The male tennis players soon followed suit. The tradition became rooted the manicured lawns of the All England Croquet & Lawn Tennis Club.

Current tournament officials have gone great lengths to demand compliance. To discourage malefactors they keep modifying a now 10-point detailed set of rules. Very detailed. One high or lowlights points out “white doesn’t include off white or cream.” Any trim of color cannot be more than 1 centimeter wide (that’s 10 millimeters for those who are counting). Visible undergarments also need to be completely white.  That means you lady in red undies Tatiana Golovin. And if a player has an injury—“ Medical supports and equipment should be white if possible…” A concession perhaps because even club officials acknowledge blood will be red.

The rules are an ongoing response to the controversies and fashion emergencies throughout the years of Wimbledon tennis.

Women typically are at the receiving end of controversy about proper tennis apparel. A few of note:

• In 1958 Karol Fageros tries some Cold War subterfuge by wearing gold lame underwear beneath her pure white tennis dress. Officials are not amused and ban her from play until she changes to white.

• In an outfit for the ages, Anne White (yep not making that name up) wears a full body suit- all white. When her 1985 match is suspended due to darkness. The chair umpire tells her to come back the next day is something more appropriate. She does and loses.

For current tennis players at Wimbledon or the club court, you can stay legal with a Stella McCartney designed Adidas dress. Leave the colored undies at home.

In more recent years men have joined the parade of those committing crimes against tennis apparel. Andre Agassi for 3 years in the 1990s preemptively declares himself guilty and doesn’t show up for the tournament to protest the dress code. He finally declares himself rehabilitated and dresses in white and wins the men’s single title in 1992.  A few others include:

• Radek Stepanek in a fit of czech shows up for a match in 2012 with too colorful tennis shoe (red white and blue) and is told to change before he can play.

• In 2013 clever and multiple-time Wimbledon tennis champion Roger Federer dresses in classic all white outfit and some nice white tennis shoes. But the soles of his shoes are orange (!). When officials are revived, Federer change to white soles for the rest of the tournament. And inspires Wimbledon white rule #8. “Shoes must be almost entirely white, including the soles…”

• Nick Kyrgios earns himself an official citation for wearing an official Wimbledon headband. Read that again slowly. He turns the purple and green headband inside out to show just white and then begins to play in 2015. The All England club still gets it license royalty payment on the purchase.

All tennis lpving men can avoid a major Wimbledon tennis shoe malfunction with the new Babolat Propulse BPM All Court Wimbledon White tennis shoes. Even the soles are legit.

The gang at ESPN compiled the long sordid history of Wimbledon tennis fashion emergencies and absurdities. Even now, you can choose from many special commemorative Wimbledon tennis lines from top manufacturers.

What’s your vote for the most outrageous player outfit over the years? Anyone from the 2016 Wimbledon tennis tournament catch your fancy in his or her Wimbledon whites?